The  eWitness workflow is shown in the Figure on the left. John Doe installs the eWitness application on the smar-phone. At first use, the application asks John to register with his sponsoring organization that hosts an  eWitness blockchain. The system creates a pseudo identity which is registered with the eWitness system. This pseudo identity is tied John’s sponsoring organization. It cannot be traced back to John by anyone other than that organization. John can now use his app to take pictures and videos. The application uses an algorithm to create a unique signature that contains information about the origin of the media. This signature can be transmitted to any eWitness node participating in the blockchain consensus. The signature is accepted as long as the pseudo identity is registered with the eWitness system

.  An E-Witness ledger entry, shown in the Figure on the left, is created by the consensus node and eventually added to the E-Witness blockchain. 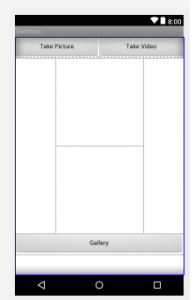 The alpha version of the eWitness app has the following features:

a) It registers a first time user, saving credentials in Google Firebase. The app allows seamless login at subsequent use as well as the ability to logout to clear the credentials. In the alpha version, a single firebase account is used for all identity management. As eWitness enlists participants in its network, each participant will be expected to maintain its own identity system and registering only the pseudo-identity with the eWitness blockchain.

b) A user can use this app to take still pictures and capture videos. These files are saved in the app private storage.

c) The app has the ability to detect whether the device is using mock location application or developer mode.

d) The app allows users to share images and videos with anyone via email as well as multimedia messaging. 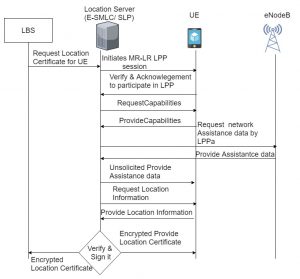 A secure location-aware application for mobile phones requires verification that a mobile is indeed at the location it claims. While most mobile and smart phones today are capable of reliably obtaining their location through various publicly available localization infrastructures, unfortunately it all too simple to spoof the location by using mock location on the device. A somewhat sophisticated user can even report a false location by replaying signals that were captured at another location. Therefore, most mission critical location based services use location aggregators to obtain verification of mobile phone location. These location aggregators work with cellular carriers to obtain verified location of mobile users using a mechanism which is similar to how emergency services locate 911 calls from cell phones.  eWitness can also use location aggregators to prove locations of the phone when it takes a picture.

However, in the long term, we hope that a cheaper alternative might be available through emerging and evolving technology such as LTE and 5G. We have designed a sample mechanism of obtaining secure and verifiable location using LTE positioning protocols so that it is possible for cellular carriers to obtain verifiable consent from mobile users before their location is accessed and issue location proofs to mobile phone users to use with application that treats location as a mission critical component.

This entry is licensed under a Creative Commons Attribution-NonCommercial-ShareAlike 4.0 International license.

Need help with the Commons? Visit our
help page Send us a message
Skip to toolbar

Built with WordPress | Protected by Akismet | Powered by CUNY